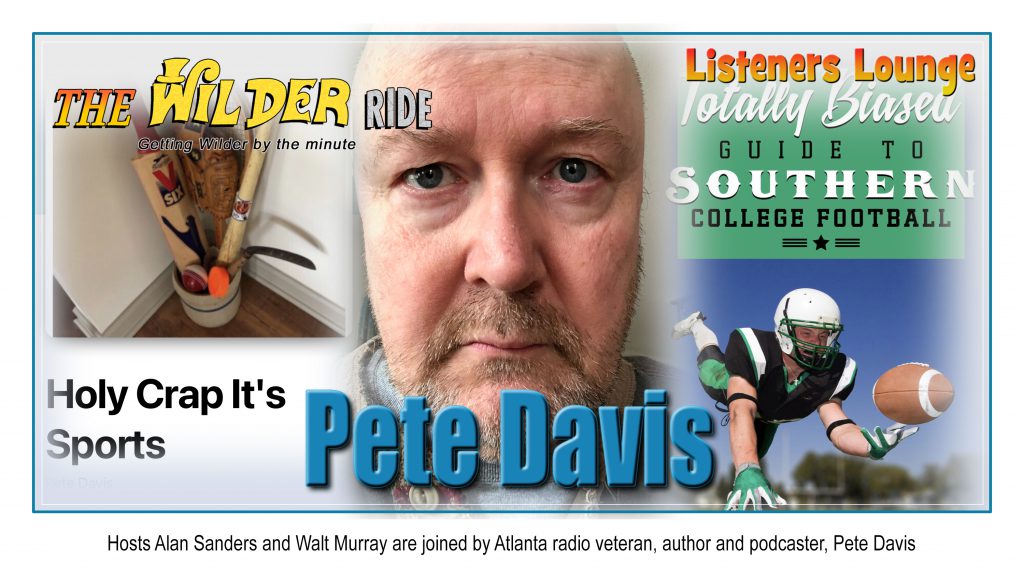 In this episode, hosts Alan Sanders and Walt Murray sit down with Atlanta radio veteran, author and podcaster, Pete Davis. Well before Pete got into writing and podcasting, he thought he was going to be an actor. He wanted to move to LA and be a star. That was until he saw a live radio show. From that point, he was focused on a career on the air waves. And, sometimes, being at the right place at the right time is all a person needs. When the opportunity arose to be involved in an evening talk show, he ran with it. Along the way, he would bring up sports, movies, current events, politics, or whatever else happened to be in his head. However, no story would be as compelling without a little drama.

At the height of Atlanta radio programming, WGST decided to launch a brand new branding strategy — Planet Radio. It will forever go down in history as one of the biggest radio debacles in history. While Pete did manage to survive a lot of the turmoil, it did create some challenges for him. As he was bouncing around, he took up writing and put out a couple of books related to his love of sports. The first one is, “The Totally Biased Guide to College Football.” The second is, “I Love Texas/I Hate Oklahoma,” and the last is, “Canines of College Football.”

While using social media to help promote his writing, he decided to get into podcasting. He created the show, Holy Crap, It’s Sports, which can be found on most pod-catchers. Given Pete’s love of sports, it made sense to spend the last 10-15 minutes of our interview discussing some sports. You may or may not know the teams or the sports, but what you will quickly learn is it doesn’t matter! Pete is such a funny guy, you just want to hear what he has to say.

Pete was not able to stick around for the rest of the show., so after his interview, Alan and Walt spent time going through odd news stories. They closed the show with the entertainment segment, breaking down what they have been watching, reading and listening to over the last week.

Walt is almost done with Only Murders in This Building and highly recommends it. He has begun to dive into season 3 of The Movies that Made Us on Netflix and Bad Sports, also on Netflix. Alan saw Dune part 1 and could not praise it enough. He believes is it a cinematic masterpiece, akin to a Christopher Nolan film. He also suggests the YouTube reaction channels, Ashleigh Burton and Popcorn in Bed.

We are just going to go past this section as both Alan and Walt have brains that function just above those of most primates and have not been able to turn the pages of a book in the last few weeks.

Walt continues to dive into the podcast series, The Murdaugh Murders. He has also been listening to The Thrilling Adventure Hour and Wondery. Alan contines to listen to the latest Iron Maiden album, Senjetsu. He also suggests the podcasts, 60MW and Radio Labyrinth.

Really happy to hear that! Pete was a lot of fun to chat with and we love being able to spend some time with their backstories as well as where they are today.

Great show and you’ve gained another follower. Like the format and you keep it going without shaking the money cup every ten seconds like some podcast I no longer listen to. Pete is great and of course the Kimmer is AWESOME. Thanks for a great show and I look forward to future episodes. Iron Maiden reference got you big points with me also.

So glad you liked it! We added this “sidecast” (for lack of a better term) when covid hit and we loved being able to interview interesting people. Seasons 3 and 4 are just about all interviews. Our first two seasons were dedicated to breaking down a Gene Wilder movie one minute of the film at a time. We plan to get back to that, too!