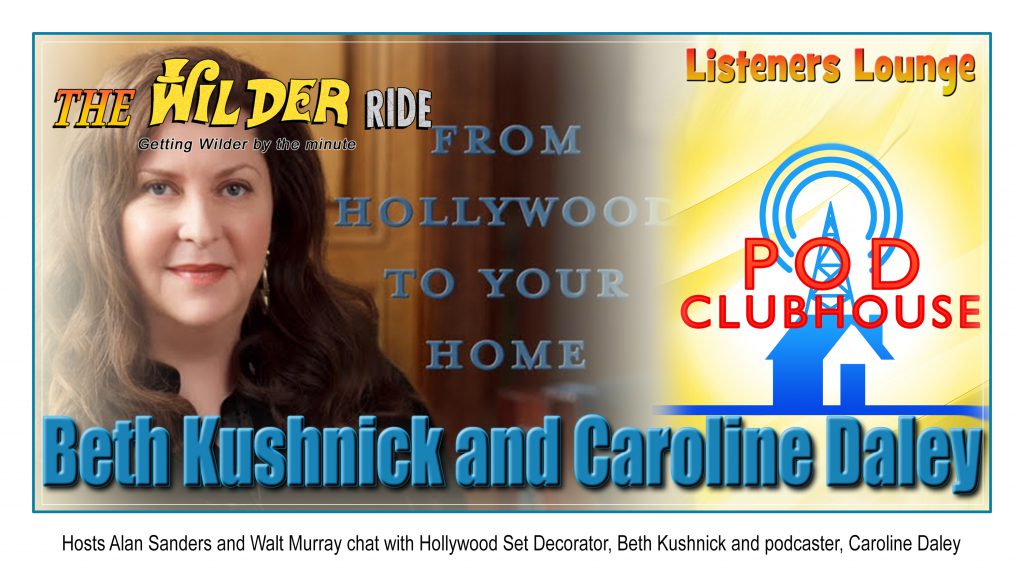 In this episode, hosts Alan Sanders and Walt Murray interview long-time Hollywood set decorator, Beth Kushnick and podcast host, Caroline Daley. Before we get into the podcast Beth and Caroline host at Pod Clubhouse, we spend some time chatting about Beth’s history. She has been in the business for over 35 years, working on films and television shows, cutting across almost every genre and locale. We spend time talking about the differences in design versus decoration and how those terms are a little different in film versus stage and television. Beth has had to evolve over time, learning to incorporate elements of CGI into set decoration.

As we catch up to her current history, Beth said social media and the internet brought an audience who want to know how to decorate their homes like some of their favorite shows. She began a blog, breaking down the elements of her designs. She eventually began a partnership with an online company who would create the set pieces for private ownership.

Continuing to evolve in social media engagement, Beth Kushnick became a guest on Pod Clubhouse. It led to the creation of a new podcast, Decorating the Set. Caroline and Beth are just at the start of their 3rd season and encourage listeners to send them pictures of their spaces so they can provide tips and suggestions on how to re-stage your own space.

After the interview, Alan and Walt share a few crazy news stories, while Beth and Caroline comment. We then end with the entertainment segment, where all four discuss what they have been watching, reading and listening to.

Walt highly recommends, Only Murders in the Building, with Martin Short and Steve Martin on Hulu. He also said, Young Frankenstein is on Amazon Prime. Finally, Walt is onto season two of Ted Lasso on Apple TV. Alan re-watched, Space Cowboys and The Fighting Seabee’s with his visiting father-in-law. He also suggests the YouTube movie reaction channels, Ashleigh Burton and Popcorn in Bed. Beth has been diving in the trippy show, Nine Perfect Strangers, with Nicole Kidman and, Scenes from a Marriage. Caroline has just one she’s been watching and that’s the show, Heels.

Walt is still working through the Star Trek unauthorized oral history book and, “Don’t Make Me Pull Over.” Alan, in preparation for Denis Villeneuve’s Dune film, is re-reading the book, “Dune,” by Frank Herbert. Beth is diving head-long into all of her Fall furniture catalogs and just orders the book, “Last Chance Texaco,” by Rickie Lee Jones. Caroline just finished the book, “Between, Georgia,” and gives it two big thumbs up.

Walt is about to start the podcast series, The Murdaugh Murders. He also loved these series, The Rise and Fall of Mars Hill, and he once again recommends, In the Red Clay. Alan caught up with episodes of 60MW Podcast and The Great Escape Minute. He also discovered that when he tells his Alexa, “Play slow music by John Coltrane,” he gets just the slower, more somber pieces of Jazz my the brilliant John Coltrane. Caroline has been listening to various artists playing sitar music for a change of pace. She also likes the podcast, It’s a Musical Podcast with Drew and Danny. And, though a shameless plug, said she loves to listen to the shows of the other hosts from Pod Clubhouse.