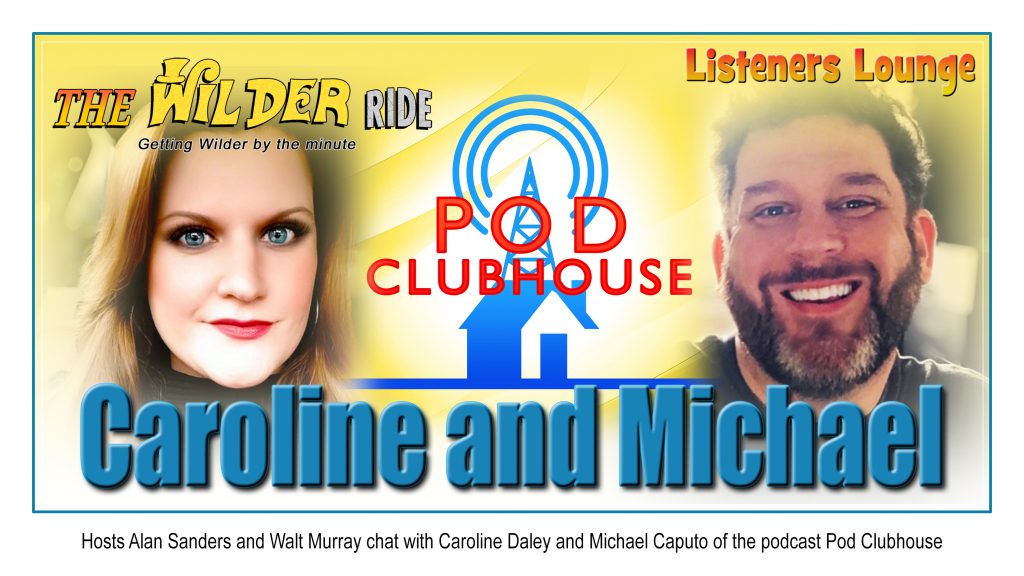 In this episode, hosts Alan Sanders and Walt Murray get a chance to sit down with Caroline Daley and Michael Caputo of Pod Clubhouse. Alan and Walt were featured on their show, Interview with a Podcast, which dropped in January of 2021. On that show, Caroline and Michael like to bring a spotlight to other podcasts. Alan and Walt had such a fun time being interviewed, they wanted to return the favor in season 4 of The Wilder Ride.

Caroline Daley and Michael Caputo of Pod Clubhouse each started in media separately, but found each other via a radio program. It did not take long for the two of them to realize they fed easily off each other. It led to the creation of a new podcast. The concept behind Pod Clubhouse was to bring other podcasts and voices together in the spirit of collaboration. As Michael says, they believe in the concept that a rising tide lifts all boats. As they embarked, their brand has become an umbrella for several different shows.

While they still think of Interview with a Podcast as their primary show, they have added shows related to dozens of television and streaming shows. They also have a movie themed show where they are looking at 52 weeks of Christmas movies. Add to the lineup a show called, Decorating the Set, and one called PCH Press Pass. Of course, with so much content, there are several other members of the Pod Clubhouse team. You can find them listed on their website under the About Us page. As we wind down the interview portion of the show, Caroline and Michael encourage folks to proactively reach out to them if you would like to join forces on an episode. There is no guarantee, but life is easier for them if people feel comfortable reaching out to them.

As the episode continues, Walt dives into his horrible movie review, which was selected by members in our Facebook Listeners Group. Alan and Walt then get into a few news items and then all of them wrap up the show with the entertainment segment.

Walt finished season 1 of Tin Star on Amazon Prime, giving it an enthusiastic review. He just started to watch Bosch season 7 and highly recommends the Eddie Murphy movie, Mr. Church, streaming on Netflix. Alan also finished season 1 of Tin Star and loved it. With his father-in-law still visiting, he went back to watch some older flicks. They included Iron Man, Kindergarten Cop, Galaxy Quest and Silverado. Alan also encourages the YouTube channel, Ashleigh Burton, who reacted this week to the films of Fried Green Tomatoes and the 1962 Cape Fear. Radio Labyrinth had a YouTube show out discussing Loki. Popcoun in Bed reacted to The Hobbit, The Desolation of Smaug, The Battle of the Five Armies and Schindler’s List. Finally, on The Daily Doug, previous guest Doug Halvering reacted to Queensryche’s, “Suite Sister Mary,” which included a shoutout to our own podcast! Caroline watches, Sex LIfe and Penguin Town, both on Netflix. Michael recommends, Kevin Can F Himself, on AMC, Central Park on Apple TV and Domina on Epix.

Walt and Alan both continue to work through the Star Trek unauthorized history, “The Fifty-Year Mission: The First 25 Years.” Alan also read, “How to Love Your Child More Than You Hate Your Ex,” by Dr. Larry Waldman for another show called, The Marriage Fit Podcast. Caroline is currently reading, “Last Summer at the Golden Hotel,” by Elyssa Friedland. Michael is working his way through all three volumes of the comic book, Invincible.