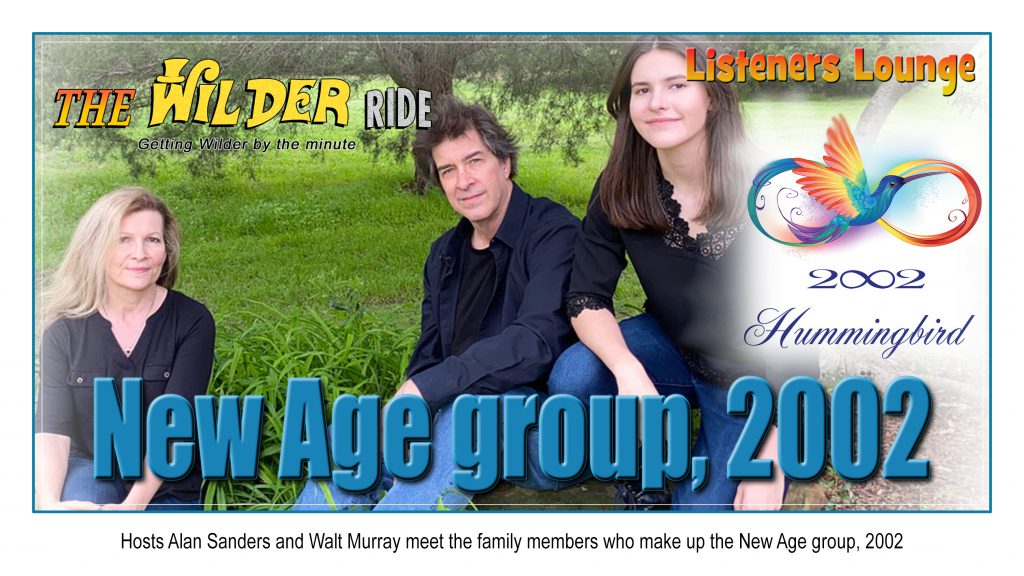 In this episode, hosts Alan Sanders and Walt Murray meet the family members who make up the New Age group, 2002. The story begins with husband and wife, Randy and Pamela meeting in high school theater. They both had a love for music early in their lives. The two would go in separate directions after high school, getting involved with various bands as part of their musical journeys. After nearly a decade, circumstances returned them both to the Texas area where they reunited. That would eventually become the team who would create the New Age group, 2002.

The choice of that kind of music actually came from an event where Pamela was asked to play random, soothing melodies on her flute at a gathering. At the end, those in attendance wanted to know where to buy their music? From the simplest of starts has grown one of the most renowned and successful new age groups of the last few decades. As their daughter, Sarah, grew up in a musically gifted environment, she soon developed her own skills, both as a musician and a singer. Soon her talents were added to mix, creating even more depth and variety of music and melodies.

Their most recent album, Hummingbird, is available for digital download and the physical media will be available in mid-July 2021. As one well-respected critic, Steve Shepherd, writes:

“It is hard to explain this, but whilst writing this review I haven’t spoken, drank, or moved, and barely even breathed, and only just realized I hadn’t even saved my work, this is how amazingly great this album is, I kid you not, this is without doubt the best instrumental album that 2002 have ever created. Hummingbird will probably go down in musical history as one of the best examples of 21st century New Age music there is, as it really doesn’t get any better than this.”

Tracks heard in the interview:

Gathering the Clouds from Hummingbird

After the interview, Walt provides a movie review of Waterworld. Then the two breakdown some crazy items in the news of the past week, followed by the entertainment segment, where the dive into what they have been watching, reading and listening to since the last episode.

Walt started the series Formula One: Drive to Survive. He also started some binge-watching of MASH on Hulu. Alan watched Honest Thief with Liam Neeson and enjoyed the somewhat predictable film. He also started to watch the series, Tin Star, with Tim Roth, which started in 2017. He re-watched Robin Hood: Prince of Thieves, a guilty pleasure for him and his wife. On YouTube, Alan watched Ashleigh Burton’s reaction channel where she covered Tremors, Caddyshack, Ed Wood and Smokey and the Bandit. On the channel Popcorn in Bed, he watched Cassie and her sister react to a first-time watch of Jaws. He always catches The Daily Doug, especially on Iron Maiden Monday’s and The Charismatic Voice, where the host looked at the performance of the song, “Fear of the Dark,” by Iron Maiden.

Both of our hosts were slackers this week, having nothing useful to share here.

Walt continues the engrossing but disturbing podcast, Camp Hell: Anneewakee. He also listened to the recent episode of Smartless with special guest, David Cross. Finally, he recommended the podcast, Stuff You Should Know. Alan continues to listen to 2002’s music, the podcast Radio Labyrinth and the 60MW Podcast.